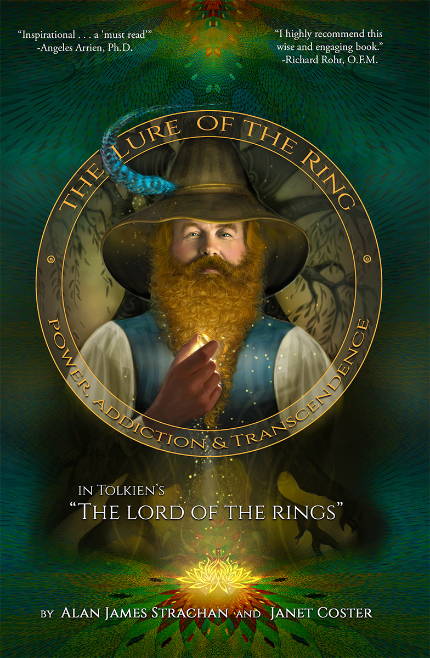 The Lure of the Ring: Power, Addiction and Transcendence
in Tolkien’s The Lord of The Rings

“The Lure of the Ring compellingly captures the essence of addiction, the seduction of power, and the nature of embodied spiritual transformation. I highly recommend this wise and engaging book.”
‍
— Richard Rohr, O.F.M., Founder of Center for Action               and Contemplation.

“The Lure of the Ring is one of those few books that honors and ignites the power and mystery of the interior life … an inspirational book that demonstrates how personal mythology directs our actions and organizes our experiences. . . . A 'must read' … so relevant for human beings, individually and collectively at this time in history!"

—Angeles Arrien, Ph.D., Cultural Anthropologist and author of              The Second Half of Life and Living in Gratitude

“Tolkien admirers have good reason to thank Strachan and Coster for their elegantly written, convincing reading of this 20th Century epic, and for their lucid analysis of its enduring relevance to all those on the path of personal growth and spiritual development.”
‍
— Ralph White, co-founder of the New York Open Center              and author of The Jeweled Highway: On the Quest for a
Life of Meaning
‍

Chapter 1:
Galadriel is tested by the One Ring

One of the most compelling scenes in Peter Jackson’s visually arresting film version of Tolkien’s The Lord of the Rings occurs when Frodo the Hobbit and his Fellowship-of-the-Ring companions pause during their perilous journey to spend a night amongst the elves. Frodo has been entrusted with guarding and destroying the One Ring created by the Dark Lord Sauron for the purpose of seizing dominion over Middle-Earth. Sauron’s power is growing and Frodo’s harrowing quest to destroy the One Ring – and thereby prevent Sauron from acquiring such dominion – is in grave danger.

Galadriel, the Lady of the Wood and Queen of the Elves, glides by in the dark of night, and Frodo awakens. Following her, she leads him to a mirror that can be used to foretell the future. Gazing into the mirror, Frodo sees a horrifying vision:  the enslavement of the Hobbits by Sauron and the destruction of their beautiful Shire. Galadriel tells him that this vision “is what will come to pass, if you should fail. The Fellowship is breaking, it has already begun. He will try to take the Ring, you know of whom I speak. One by one, it will destroy them.”

Frodo can feel how resisting the corrupting power of the Ring already has begun to wear on him. He tells Galadriel, “If you ask it of me, I will give you the One Ring.”  He holds out his hand, palm up, and on it rests the golden Ring of Power. Only twice before – when Frodo’s Uncle Bilbo offered it to him, and when Frodo himself offered it to Gandalf the Wizard – has someone offered to permanently relinquish the powerful and seductive Ring.

“You offer it to me freely?” Galadriel says with surprise, and slowly approaches Frodo. Her hand is shaking as she reaches towards the Ring. Her voice suddenly resonant, throaty with feeling, she says, “I do not deny that my heart has greatly desired this.” A darkness begins to envelop them. Frodo looks at her, eyes wide, brow slightly furrowed.

Galadriel raises her arms high above her head. Her voice rises to a shriek as she declares, ”IN THE PLACE OF A DARK LORD, YOU WOULD HAVE A QUEEN!”  A wind whips her hair and garments and the darkness thickens. Her voice becomes deep and powerful, and her eyes shine with an unearthly glow, “NOT DARK BUT BEAUTIFUL AND TERRIBLE AS THE MORN!”

“TREACHEROUS AS THE SEAS! STRONGER THAN THE FOUNDATIONS OF THE EARTH! ALL SHALL LOVE ME AND DESPAIR!” Abruptly she stops. The preternatural light returns to normal, as do Galadriel’s features, “I have passed the test,” she says quietly, handing back the ring. “I will diminish, and go into the West, and remain Galadriel.”

In this precipitous moment, Galadriel has learned something of surpassing importance:  that she has inner strength to turn down the opportunity to wield ultimate power.

Frodo plaintively tells her, “I cannot do this alone.”
‍
“You are a Ring-bearer, Frodo. To bear a Ring of Power is to be alone.”  She extends her hand to him. “This task was appointed to you, and if you do not find a way, no one will.”

Galadriel bends down to speak to him at eye level, “Even the smallest person can change the course of the future.”Galadriel, having refused ultimate power for herself, goes one step further:  wisely she empowers Frodo with the knowledge that, though he might feel small and afraid by comparison with Sauron and the Ring of Power, he nevertheless has the strength within him to succeed. When they part she bestows upon him a small vial, a further precious gift. “I give you the light of Eärendil, our most beloved star. May it be a light for you in dark places, when all other lights go out.” (Walsh, Jackson and Boyens, The Lord of the Rings: The Fellowship of the Ring, pages 103-104).

It is not simply Galadriel’s position of authority amongst the elves that allows her to give this second gift. More significantly, she is passing on to Frodo a symbol of the strength of character she has demonstrated in her own struggle with the One Ring, i.e., the strength to find light in the midst of terrible darkness.
‍

Chapter 2:
The Ring as a measure of character

There is wisdom in Lord Acton’s well-known assertion that “power corrupts, and absolute power corrupts absolutely.” Power is seductive because it feeds the core need of our ego personality to be in control. Control assuages the fear and insecurity of the ego, nurturing its narcissism. The greater the power, the greater the opportunity – and therefore the temptation – to do whatever we want. Thus “absolute” power particularly is seductive because it feeds our narcissistic desire to have godlike control.

Abraham Lincoln observed, “If you want to test a man's character, give him power.” In The Lord of the Rings, ultimate power, and therefore the ultimate test of character, is represented by the One Ring created by Sauron. The Ring of Power exerts a nearly irresistible pull, and throughout the story many are tested by its corrupting influence.

Galadriel’s battle to resist the allure of the Ring is a vivid depiction of the way in which power can begin to seduce and corrupt. In her case, however, she has the strength to resist the temptation. Previously, Gandalf, too, showed great wisdom and restraint when he refused Frodo’s offer of the Ring:

"No! With that power I should have power too great and terrible. And over me the Ring would gain a power still greater and more deadly! Do not tempt me! For I do not wish to become like the Dark Lord himself. Yet the way of the Ring to my heart is by pity, pity for weakness and the desire of strength to do good. Do not tempt me! I dare not take it, not even to keep it safe, unused. The wish to wield it would be too great for my strength." (Tolkien, The Fellowship of the Ring, pages 70-1)

In earlier chapters of the Ring’s history, we also discover that a young boy named Sméagol was not so wise, and that he succumbed to the dark power of the Ring, killing his friend Déagol to gain possession of it. Under its baleful influence, Sméagol eventually degenerated into Gollum, a miserable, pitiable creature utterly obsessed with desire to reclaim his “Precious,” the Ring. So, too, the Ringwraiths were altered by the Ring into the undead Nazgûl. They were at one time the nine Kings of men but, blinded by greed and power, they became Sauron’s “most terrible servants; darkness went with them, and they cried with the voices of death.” (Tolkien, The Silmarillion, page 346) Again and again we see the power of the Ring corrupting those who seek to possess it, turning them to evil even if their original intention is to use it toward noble ends.

The psychospiritual development of the characters in The Lord of the Rings can be assessed by their response to the Ring. At one end is the Dark Lord, Sauron, who utterly has succumbed to his craving for power, and who is completely identified with the Ring. Then there are characters such as Galadriel, Gandalf the Wizard, and Frodo, each of whom mightily struggles against and, to varying degrees, resists the allure of the Ring. Later on, we will see – at an entirely different level of psychospiritual development – Tom Bombadil. He, and he alone, functions from a unique and radical paradigm in relation to power and the Ring.
‍

This is just an excerpt - to read the whole book, select the Amazon link below: